The Samsung data center SSD lineup also adds the first NVMe-based PCIe SSDs designed for channel sales in 2.5-inch U.2 and 22-mm-by-110-mm M.2 form factors. At the other end of the performance spectrum, the new entry-level 2.5-inch 860 DCT 6 Gbps SATA SSD targets customers who want an alternative to client SSDs for data center applications, according to Richard Leonarz, director of product marketing for Samsung SSDs.

Noticeably absent from the Samsung data center SSD product line is 12 Gbps SAS. Leonarz said research showed SAS SSDs trending flat to downward in terms of units sold. He said Samsung doesn’t see a growth opportunity for SAS on the channel side of the business that sells to SMBs such as system builders and integrators. Samsung will continue to sell dual-ported enterprise SAS SSDs to OEMs. 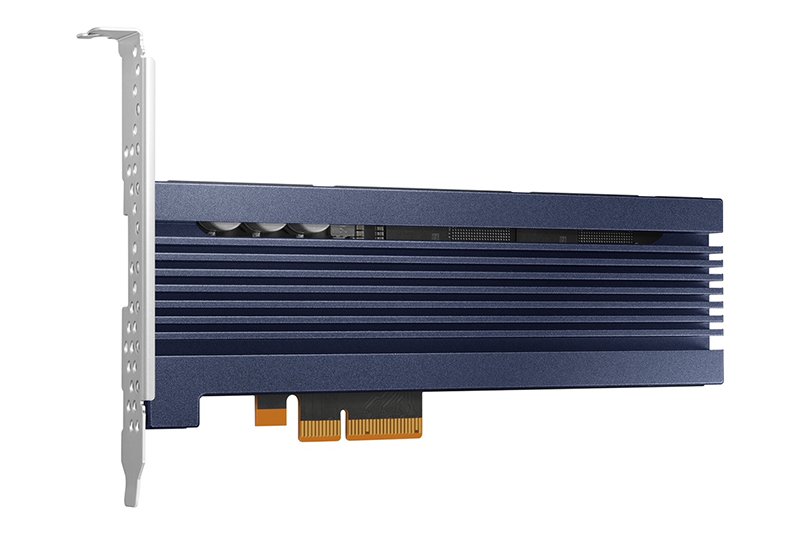 The Z-NAND technology in the new 983 ZET SSD uses high-performance single-level cell (SLC) V-NAND 3D flash technology and builds in logic to drive latency down to lower levels than standard NVMe-based PCIe SSDs that store two or three bits of data per cell.

“I don’t expect to see millions of customers out there buying this. It’s still going to be a niche type of solution,” Leonarz said.

Both the SZ985 and new 983 ZET are half-height, half-length PCIe Gen 3 add-in cards. Capacity options for the 983 ZET will be 960 GB and 480 GB when the SSD ships later this month. SZ985 SSDs are currently available at 800 GB and 240 GB, although a recent product data sheet indicates 1.6 TB and 3.2 TB options will be available at an undetermined future date.

Samsung’s SZ985 and 983 ZET SSDs offer significantly different endurance levels over the five-year warranty period. The SZ985 is rated at 30 drive writes per day (DWPD), whereas the new 983 ZET supports 10 DWPD with the 960 GB SSD and 8.5 DWPD with the 480 GB SSD.

“One of the biggest challenges we face whenever we talk to customers is that folks are using client drives and putting those into data center applications. That’s been our biggest headache for a while, in that the drives were not designed for it. The idea of the 860 DCT came from meeting with various customers who were looking at a low-cost SSD solution in the data center,” Leonarz said.

He said the 860 DCT SSDs provide consistent performance for round-the-clock operation with potentially thousands of users pinging the drives, unlike client SSDs that are meant for lighter use. The cost per GB for the 860 DCT is about 25 cents, according to Leonarz.

The 883 DCT SATA SSD is a step up, at about 30 cents per GB, with additional features such as power loss protection. The performance metrics are identical to the 860 DCT, with the exception of its higher random writes of 28,000 IOPS. The 883 DCT is better suited to mixed read/write workloads for applications in cloud data centers, file and web servers and streaming media, according to Samsung. Capacity options range from 240 GB to 3.84 TB.

The 983 DCT NVMe-PCIe SSD is geared for I/O-intensive workloads requiring low latency, such as database management systems, online transaction processing, data analytics and high performance computing applications. The 2.5-inch 983 DCT in the U.2 form factor is hot swappable, unlike the M.2 option. Capacity options are 960 GB and 1.92 TB for both form factors. Pricing for the 983 DCT is about 34 cents per GB, according to Samsung.

Your satisfaction is our most important responsibility. Our company is dedicated to providing the very best in care to our clients. It is out intent to make assurances to the client with regards to the deployment of technology and providing services, keeping on point out client's priorities, ideas and business objectives.